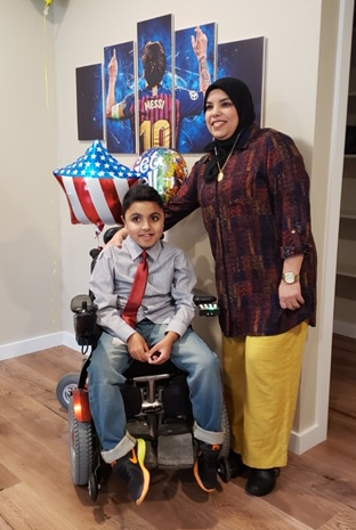 The Home Builders Foundation (HBF) recently partnered with Berkeley Homes and their trade partners to create an addition for Hatim B., a smart, 11-year-old boy living with Duchenne Muscular Dystrophy (DMD), a progressive disease that causes muscle weakness. Hatim has been using mobility equipment, including both power and manual wheelchairs, to assist his mobility.

Hatim’s family home lacked accessibility, and even the space to store his wheelchairs. As a result, both of his wheelchairs stayed at school, and he was carried from place to place within the home by family members. The family needed assistance and worked with their case manager at Children’s Hospital to fill out an application with the HBF. After receiving Hatim’s request for assistance, which included a ramp and bathroom modifications, the HBF visited the home to assess the project and began sourcing a Project Captain to complete the work.

One of the HBF’s long-time Project Captains, Berkeley Homes, became interested in Hatim’s story and wanted to help. However, there was no straightforward solution to making the necessary changes to the home within the existing footprint. Berkeley Homes suggested that instead of simply modifying the bathroom and building ramp, they would build an entire addition to the home, and a ramp. Over the course of the last 5 months, Berkeley Homes and their trades partners have passionately worked on creating this space for Hatim, which will allow him to be safe and independent.

“These modifications are an important next step for Hatim and his independence, as well as a safety measure for our entire family. We are so thankful!” – Nadia B., Hatim’s mom

Recently HBF, Berkeley Homes, their trade partners, and Hatim’s family and friends gathered together to reveal the addition to Hatim. There, Larry Malone, Executive Vice President of Development and Construction at Berkeley Homes, announced that the total value of Hatim’s addition was nearly $110,000, but thanks to the generosity of Berkeley Homes and their trade partners (listed below), it was completed at no cost to the HBF and, like all HBF projects, no cost to Hatim or his family.

“Our Berkeley Homes team is very proud of the completion of another great HBF project and the changes the we have made in Hatim and his family’s life! Hatim’s family and friends are forever grateful that the HBF provided them this opportunity. We at Berkeley Homes are thrilled to partner with all of you to make this dream a reality for this great family.” – Larry Malone, Berkeley Homes

HBF would like to thank everyone involved in this project, and look forward to seeing Hatim thrive with his newfound independence.

previous“Mayor of Elyria” Returns to Renovated Home: ‘This Is The Best Christmas Present’

nextNew board members join the HBF!