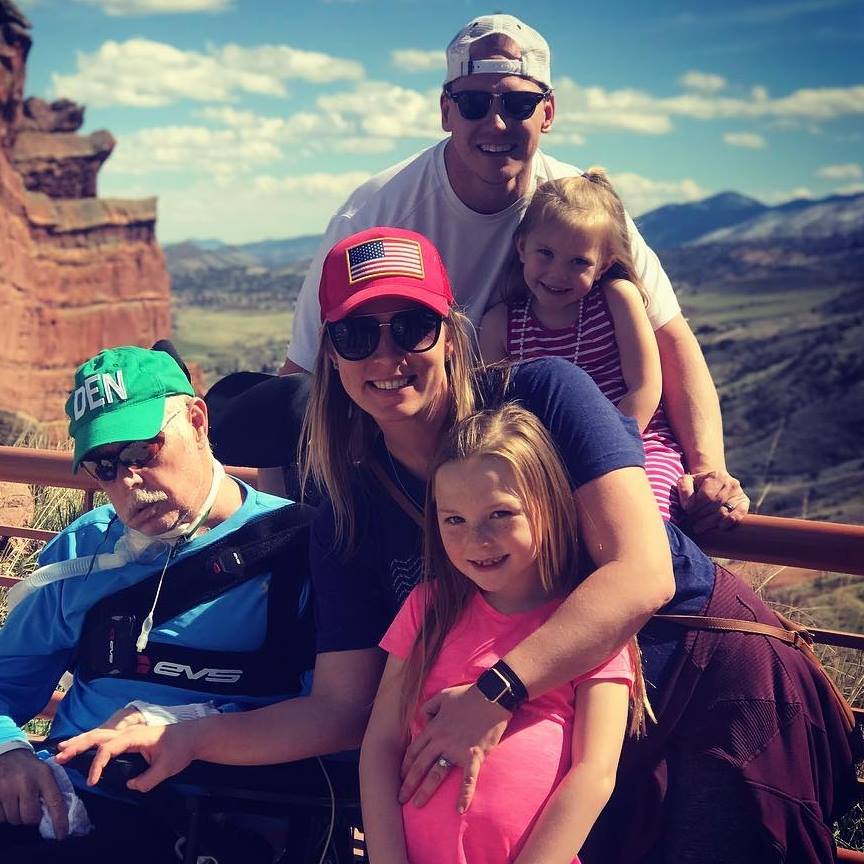 1 year down! It’s hard to believe that my journey with the HBF started a year ago, on the day of the 2019 Annual Luncheon. I have had an absolute blast and have truly enjoyed every minute of the last year. During that luncheon one year ago, I had no idea that by the end of this first year my family would become an HBF recipient and my appreciation and understanding of the work the HBF does in our community would be so near to my heart and my home.

I decided to accept the position as HBF Community Development Director for a multitude of reasons including, but not limited to: I love Beth and the mission; the Board of Directors is actively involved and the work of the HBF is instantaneous and long lasting. (The quick commute from my home to work was a bonus, too. I could finally drop my girls off at school!) Admittedly, when I first started, I didn’t have a total grasp on the disabled community we were serving, but in most non-profit jobs that is usually the case and I was confident I would learn as I went. My level of understanding however, would all change 3 months later.

On February 21, 2019, my perfectly healthy 62-year-old dad, Scott, was enjoying his daily workout at his gym in Naples, Florida when suddenly experienced extreme pain in the right side of his face. He called 911 and was rushed to the hospital. After an 8-hour surgery we learned that my dad experienced a massive brain stem stroke caused by an AVM hemorrhage in his cerebellum. There had been a “ticking time bomb” of poorly formed blood vessels and veins in his brain his whole life and we had no idea. Over the next 3 weeks in the ICU we would discover that my dad was lucky enough the retain 100% of his cognitive functions but had experienced right side facial paralysis and left side body paralysis, leaving him without the ability to walk, talk or breathe independently.

Surprisingly, there are not a lot of great options for rehab hospitals in South Florida and on day 21 at the ICU we found out he had been accepted into Craig Hospital’s in-patient TBI program. We set up air ambulance transport and started our journey of being a patient of one the best rehab hospitals in country.  As I look back at our first few weeks at Craig, it’s a miracle the staff survived my intense extraverted family, especially because my dad was one of the highest need patients on the floor: he was on a trach and had a feeding tube 24/7; his right eye was constantly infected from not being able to close; he threw up multiple times a day; had numerous blood clots; and a pulmonary embolism. Phew! My dad was able to communicate with us with some made up hand signals which basically included thumbs up and the “I am about to throw up!” signal. He could only be moved by a Hoyer lift and someone pushing him in a wheelchair. We weren’t allowed to be alone with him without receiving multiple check offs that ensured we could keep him alive in the event the staff wasn’t around. Frankly, it was terrifying and overwhelming. Besides that, we had to process how this healthy man that I talked to every day, and who pushed a double stroller around Disney World just months earlier, couldn’t even be left alone in a hospital room.

We learned that Craig is one of those rare places that no one wants to end up at, but everyone is thrilled to be at. My dad treated his rehab at Craig like his job. He worked hard every day with speech, OT, PT, music and recreation therapy. He worked himself up to going to therapy 6 hours a day. The improvements seemed painstaking slow in the moment, but looking back the strides were tremendous. On his last weekend at Craig he was even granted permission to come to my house for 4 hours for my youngest daughter’s 5th birthday!

My dad wasn’t physically ready to come home – to my house or Florida – for good quite yet, and was recommended by Craig to go to a long-term care facility in Omaha, Nebraska called QLI. It’s a truly wonderful place that was the next step in eventually going home, and supports patients in continuing to improve with therapy in a medical setting. My dad spent the entire summer at QLI and made huge improvements, most importantly how to regain his independence within his new “normal”. QLI offers wonderful family housing that allowed us to visit my dad monthly. (My girls loved visiting QLI so much they asked when we were going on vacation there again! Vacationing in Omaha!? My husband, who grew up in Nebraska, was all for that!) It was a true testament to the wonderful staff and dad’s team!

Toward the end of his “summer break” at QLI, our family decided that my dad would move in with us in Highlands Ranch and return to Craig as an out-patient. This is when I personally began to truly understand the life changing work of the HBF.  We would need to install a temporary wheelchair ramp and stair lift into the basement to create an accessible space for my dad at our house while he continued his recovery. It is hard to put into words how our home transition would have gone without an organization like HBF. For so many families like mine who experienced a sudden, traumatic event in their life, we are suddenly thrown into this new lifestyle that is full of paperwork, decisions, doctor appointments and a way of life that is beyond overwhelming. It was terrifying and hard to think about “going home”. Knowing there were skilled volunteers and staff at HBF who knows exactly what needs to be done when you don’t have a clue is a huge relief and made the idea of coming home not so overwhelming…and even manageable.

Sitting in the HBF Annual Luncheon ballroom a year ago, never in my wildest dreams did I think I would be responsible for someone’s catheter bag, wheelchair transfers, meds, scheduling all the appointments and literally putting them in bed every night…. let alone that “someone” being my 62-year-old dad. But here is what I have learned – trauma like this completely rocks your world. At times nothing feels like it will ever feel normal or easy again. In some ways, life will always be remembered before and after February 21st. But bringing my dad home to live with us, as terrifying as it was, was closest thing we ever had to “old” normal in 6 months. So, I could never thank HBF enough: PCs, sponsors, annual supporters, donors and staff that make it possible for people like me to bring people like my dad back home. Home is our first step of gaining our independence back and establishing our new normal. Thank You, HBF!

nextSupport the HBF by Scheduling your Colorado Gives Day Now!