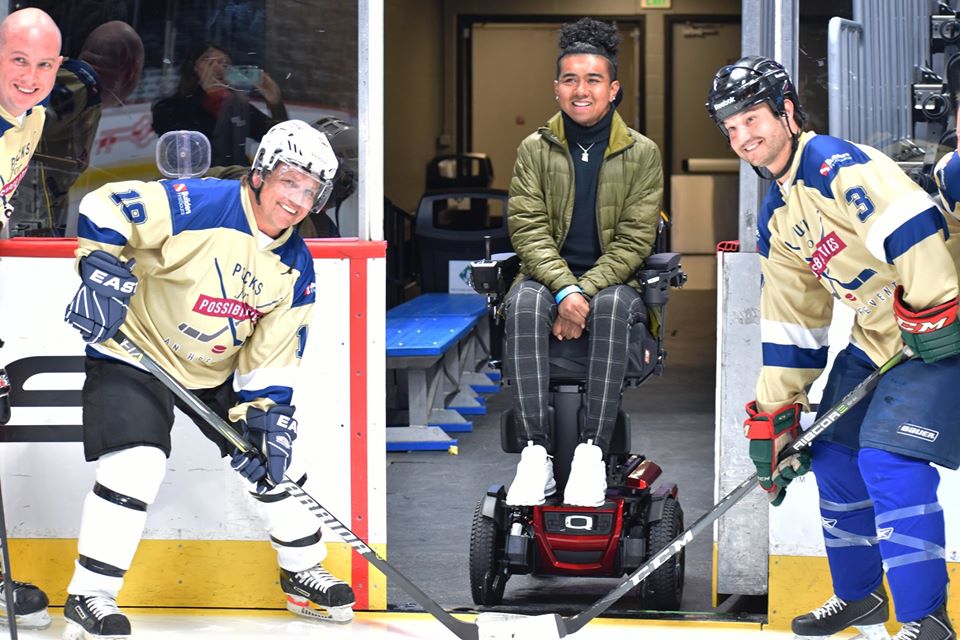 More than 400 guests gathered at the Pepsi Center and Brooklyn’s restaurant in downtown Denver on February 19, 2020 for the Home Builders Foundation’s Tenth Annual Pucks for Possibilities event, presented by Builders FirstSource. This event begins with an exhibition game on the Pepsi Center ice within the HBF’s network of builders, trades, and suppliers. During the game, and in honor of its 10-year

anniversary, HBF presented Pucks founder, Kurt Winfield, and 10-year member Jay Erickson with personalized hockey pucks, thanking them for “A Decade of Possibilities”. Both Kurt and Jay have played crucial roles as committee members, event organizers and players for all 10 years of the event.

“This was another great event for a great cause. Thanks to the HBF for the opportunity, and the Pucks sponsors, whose support allowed the players a chance to play like NHL stars they hoped to be…at least for one night.”  – Kurt Winfield, Front Range Window & Door

After the exhibition game (in which the Navy team won 8-3), close to 450 gathered together for a networking reception at Brooklyn’s, complete with food, drink and auction items. The evening concluded with block seats together at the Colorado Avalanche versus New York Islanders game.

Event organizers estimate that the event raised more than $65,000 in support of the organization’s program to support individuals with disabilities through home modifications, making it the most successful Pucks for Possibilities event to date!

“Kurt shared with the players that the first Pucks for Possibilities event in 2011 raised about $4,000. This event is now consistently raising critical funds for HBF though an ‘old guy hockey game’. That really speaks to the dedication of Kurt and the HBF team, and we are happy to support this event, and the wonderful work of the HBF in our community.”   – Jay Erickson, Builders FirstSource

All funds raised at Pucks for Possibilities will help the Home Builders Foundation fulfill their mission to build independence, provide opportunities and elevate lives for individuals and families with disabilities in our community.

previousUse your tax refund to support the HBF